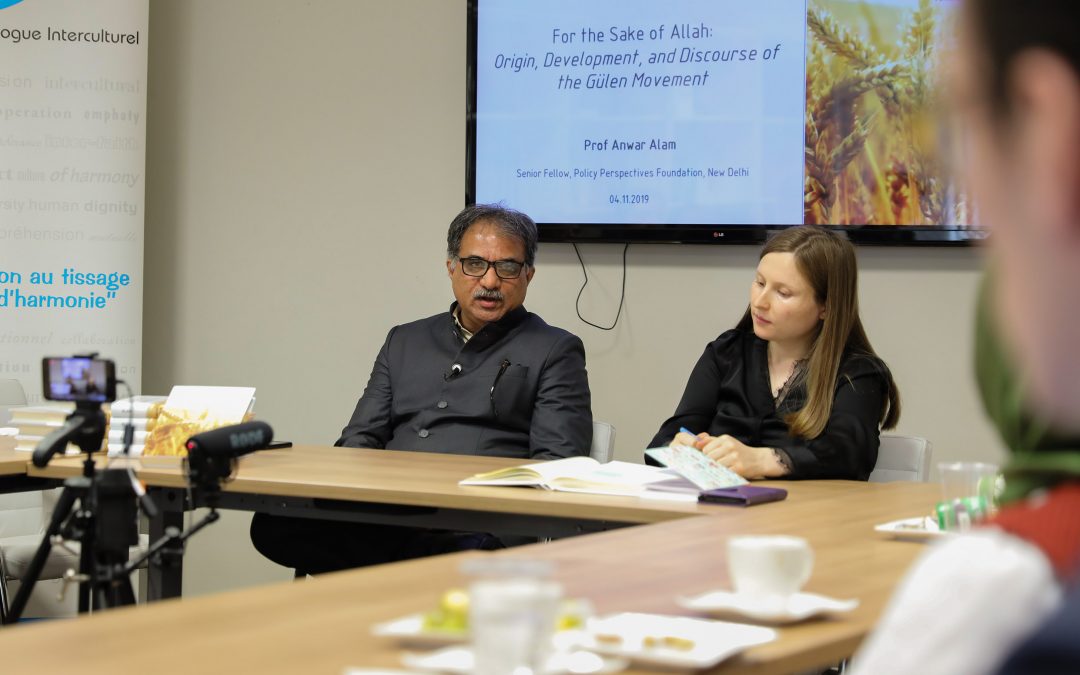 On 4th of November 2019, Professor Anwar Alam, Senior Fellow from Policy Perspectives Foundation in New Delhi, was invited to present his last work on the Hizmet Movement by Intercultural Dialogue Platform and Fedactio. The book launch opened with the arrival of guests and an initial moment of reception which gave the chance to interact with the author of the book.

Professor Anwar Alam started presenting the topic of his book to the guests. With his book “For the Sake of Allah: The Origin, Development and Discourse of the Gülen Movement”, Professor Anwar Alam intended to explore the social and cultural universe of Hizmet, free from the dominant stereotypes and clichés which have undermined a real understanding of such a movement. Indeed, the literature on the movement is still dominated by two problematic and opposite perspectives: one devises Hizmet as a mere instrument to promote Islamization of the society both in Turkey and abroad, while the other one considers it as an organization that is getting away from the essential foundations of Islam to embrace a secular vision of the world. According to Professor Alam, this misinterpretation relies on the dualist concept of an inherent tension between Islam and Secularism, East and West, a notion that somehow has been shared both by Political Islam and the Kemalist ideology. On the contrary, a real understanding of the Hizmet phenomenon can be achieved only if we take into account the three main elements introduced by Fethullah Gülen in the Islamic imaginary. First of all, by rejecting the reactive and dualist discourse of Islamic reformism, he believes that the secular dimension is nothing but a natural extension of Islam. Secondly, Gülen has probably been the first scholar to recognize from a theological point of view the discourse of change; as a consequence, rational interpretation of texts (ijtihad) becomes a necessity to live in a religious and authentic manner in each historical context, which is subjected to change by definition. Thirdly, Gülen is probably one of the few scholars who has heavily invested in education and dialogue in recent times. From this perspective, the Hizmet movement is the only one that has taken dialogue in a serious way, for the purpose of understanding and engaging with the other. The foundations of such a dialogue rely, as professor Alam explained, on the assumption that diversity is divinely intended; God has made many nations and tribes to compete among themselves for the sake of Allah, to know better each other.

After this insightful presentation, the questions of the guests had the possibility to deepen other related themes such as the ongoing persecution of the movement in Turkey, its stance towards the Kurdish issue and the future of the movement in the west.